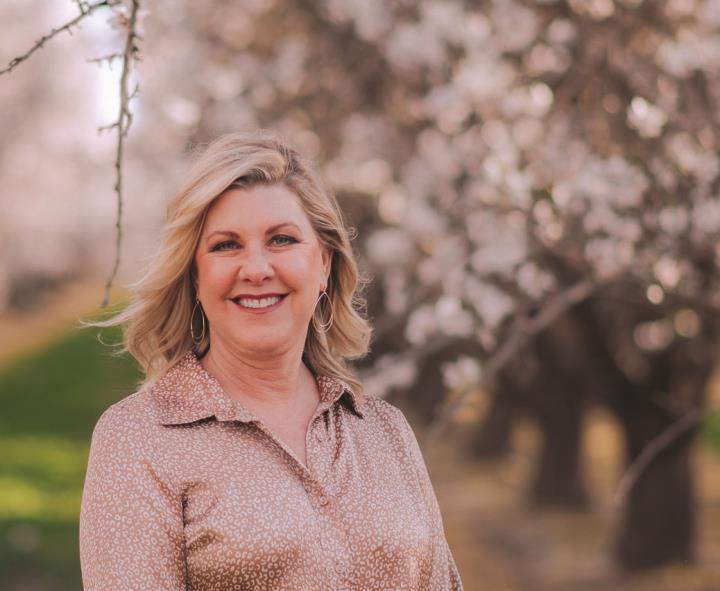 Jennifer Rogers-Etcheverry knows about family legacies and the many ways family members care for one another, generation to generation. Grandmother, mother, farmer’s wife, caregiver, businesswoman, philanthropist, board member: different roles fill her life and work, with full days and lasting impact sure to make a difference for friends, family and strangers.

“I am one of the best multitaskers that I know,” said Jennifer. “I run a couple of foundations and sit on the board of others and travel out of state but I’m also here for the farm and for my family.”

Jennifer is the great-granddaughter of Will Rogers, best known as an early 20th century social commentator, author and vaudeville performer turned actor, and she serves as a public representative for the Rogers family.

The unpaid role is a labor of love, a responsibility with private significance. Famous for his wit and words of wisdom, Will Rogers is perhaps best known for the quote “I never met a man I didn’t like,” but Jennifer finds inspiration in a less-recognized phrase of his: "Live your life so that whenever you lose you're still ahead,” advice she would recommend throughout different phases of life, with its inherent ups and downs.

Often called “Oklahoma’s favorite son,” Will Rogers moved to California to further his acting career after years of stage work and silent movies just as sound came to the big screen. A staple of movies throughout the 20s, he was equally outstanding in black and white of another kind. His writings were regularly featured in “The New York Times” and “The Saturday Evening Post” for decades, in addition to radio work and political aspirations. His name lives on in the states he has called home, with numerous landmarks and namesakes in Oklahoma and California. Sometimes confused with Roy Rogers, Will Rogers’ sincerity and philosophical tendencies made him an endearing figure whose charm outlived the golden age of the silver screen.

Jennifer co-founded the Will Rogers Ranch Foundation in 2000, which provides support to Will Rogers State Historic Park in Pacific Palisades. She is an advisory member of the National Cowboy & Western Heritage Museum in Oklahoma City and continues to be involved with the Friends of Will Rogers Foundation in Claremore, Okla., his place of burial. Jennifer has also served on the boards of the Will Rogers Memorial Museum and Will Rogers Motion Pictures.

Family is a point of pride for Jennifer. She and her husband, Mark, were born in Kern County and chose to raise their children in the same community, which is still home for all, plus their grandchildren. Mason, the couple’s son, age 27, bought his first house about half a mile from their home before having to relocate for a job in San Jose. Their daughter, Meeghan, age 30, and her husband, Dominic, bought a home just three blocks away, where they in turn raise Wyatt, 6, and Claire, 4.

“We are thrilled they are so close,” said Jennifer of the opportunity to watch her grandson walk to school and be involved with helping out wherever possible. “We have dinners together at least three nights a week. One of the greatest blessings is to have your family in the same town. It’s magical how it all came together.”

“For us, ERE Sheep Company is ‘the ranch.’ My husband grew up there, a couple of miles from us now,” said Jennifer, who created her own business from its almond production. She founded My Husband’s Nuts in 2003, a specialty retailer of flavored almonds and related merchandise.

“At that time, a lot of people were farming almonds. There was a lot of demand, it was very popular, so we took a stab at it and planted almonds when the market was at an all-time high. Soon after, it went to an all-time low. Almonds were just a hard start and it took about three years to get going,” Jennifer explained. “We kept saying ‘next year will be better, next year will be better,’ and the name of the business came from something I said to my husband in conversation, ‘What do I have to do, sell your nuts for you?’ I took the idea and dabbled with it, and here we are, almost 20 years later.”

The company ships nationwide, with distribution established in more than 20 states. Making a successful transition to e-commerce has also been key throughout the pandemic.

“COVID really took the wind out of our sails. We were in wineries, hotels, gift shops, tourist destinations, and when all those places were forced to close, we came to a screeching halt,” said Jennifer. “So we really ramped up our online sales and started offering gifts, things people could purchase for special occasions or just because. We have also been intentional about supporting local businesses.” 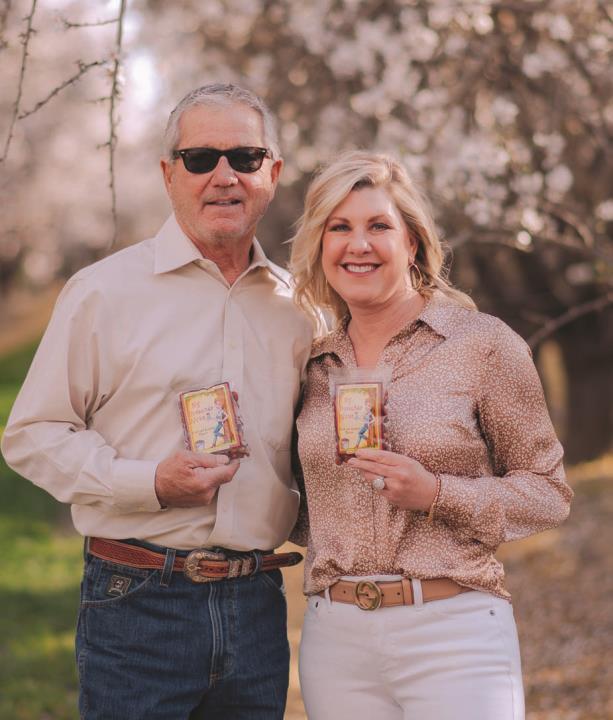 Kern County residents can find My Husband’s Nuts at Luigi’s, The Roundup, Sully’s Neighborhood Market and Sweet Surrender and online at https://myhusbandsnuts.com/.

“We fill orders and ship it all right back out,” said Jennifer, who works with her daughter in the family business. “We do a lot of it ourselves. Our grandkids help fill orders. The next generation is coming into it.”

While the possibility of hiring a contract packager, often called a copacker, is likely in the brand’s future, Jennifer is still involved in day-to-day business and farming operations. She is a graduate of California State University, Bakersfield, where she studied communications.

Through it all, Jennifer has seen the value in being adaptable and showing up as needed.

“You just never know what curves life is going to throw at you,” said Jennifer. “When my son was a senior in high school and my daughter was in college, I was thinking ‘It’s our time, finally, it’s going to be all for us, time, resources, just us. But lo and behold, that year my Dad was in a tragic car accident in Nashville. I became his primary caregiver. He passed away in Bakersfield two years later.” 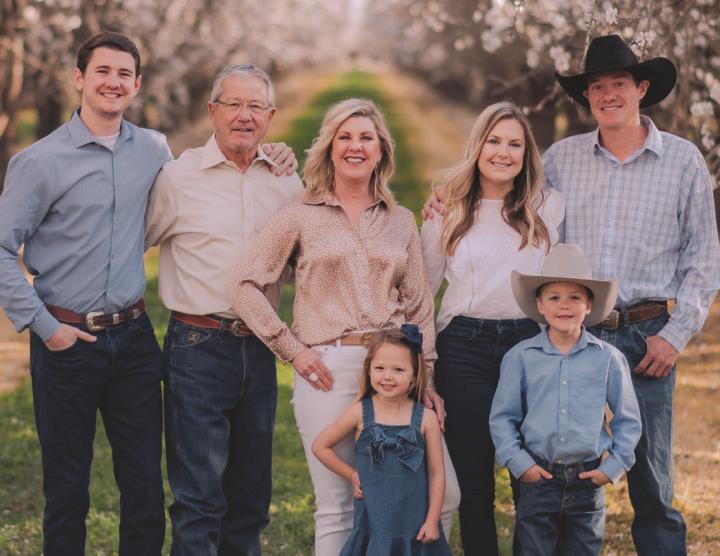 Jennifer learned the value of making sure one’s affairs are in order from the experience, a topic she feels strongly about and wants to make others, including parents, aware of.

“You can always update them as your children grow but have your finances, trust and will lined out,” she said. “If I could speak on this topic, I would want to because it is so important for families. The biggest blessing when my Dad had his accident was he already had expressed his wishes at a young age and had drawn up his papers and named us as his executors. That makes it so much easier for caregivers. It is something people don’t take seriously. We all hope to be 100 years old and pass away in our sleep but it doesn’t always happen that way.”

The experience of becoming a caregiver to an incapacitated adult shaped Jennifer’s worldview and the advice she chooses to share with younger mothers.

“You can't sit and think about doing whatever it is you want to do when your kids go off to college because you just never know,” she said. “Every mom struggles. Every mom pulls her hair out with kids and that is why I believe you have to find something just for you. Find what makes you relax a little. Some people talk a walk or meditate in the morning but that’s not always possible for moms. Even if it’s not a full hour, get outside for 15 or 20 minutes. Find what makes you happy.”

Mothers often recognize a shared sense of strain and when Jennifer notices it in her daughter, she tells her son-in-law to take her to dinner, whisks away the grandkids and makes a break possible.

Even as someone involved in so many different enterprises, she offers standout advice of her own:

“For me, I love to plant my flowers and have them looking nice,” said Jennifer. “You've got to breathe and let something go.”

Q.How has living in Kern County shaped your identity?

A. I raised my family here and I get to travel the U.S. but what I can tell you is Kern County is the definition of a community. People here do not judge you like they might in other places. They are truly here to help you. We have gone through situations where people have asked ‘How can we help you?’ Kern County residents are always supportive of their people. Seeing that support has helped me be able to turn around and offer it to other people.

Q. What should families in the Kern County area know more about in their community?

A. Families should know they are living in an amazing place. If they get out and travel and see other areas, they'll realize how blessed they are to be living in Kern County. We are two hours from mountains, two hours from the coast and there is something for everyone in-between. There’s so much to do here and our reputation isn’t what it should be. It really is a wonderful place.

Q. What is your parenting PSA?

A. Your kids don't have to be in every single sport. My son was in every sport known to man, all these sports and then also Cub Scouts. My daughter was also in a million things and I was just running all over taking them to these things. My Dad saw what was happening and asked “Why are doing that?” It’s not really the kids that always choose the sport; it’s often the parents. His advice was to try one thing at a time until they find what they love, one special individual sport for each kid. He was right. When you're just running and running and running, kids miss the family time. We ate at the dinner table, had the TV off and we never ate on the carpet. If you can’t do dinner together, then make it breakfast.

Q. Do you have any hidden talents? What's something one would never guess upon meeting you?

A. I love to travel alone. I want to see the world and I'm not afraid to do it by myself. 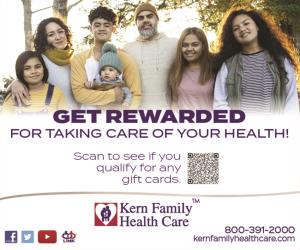